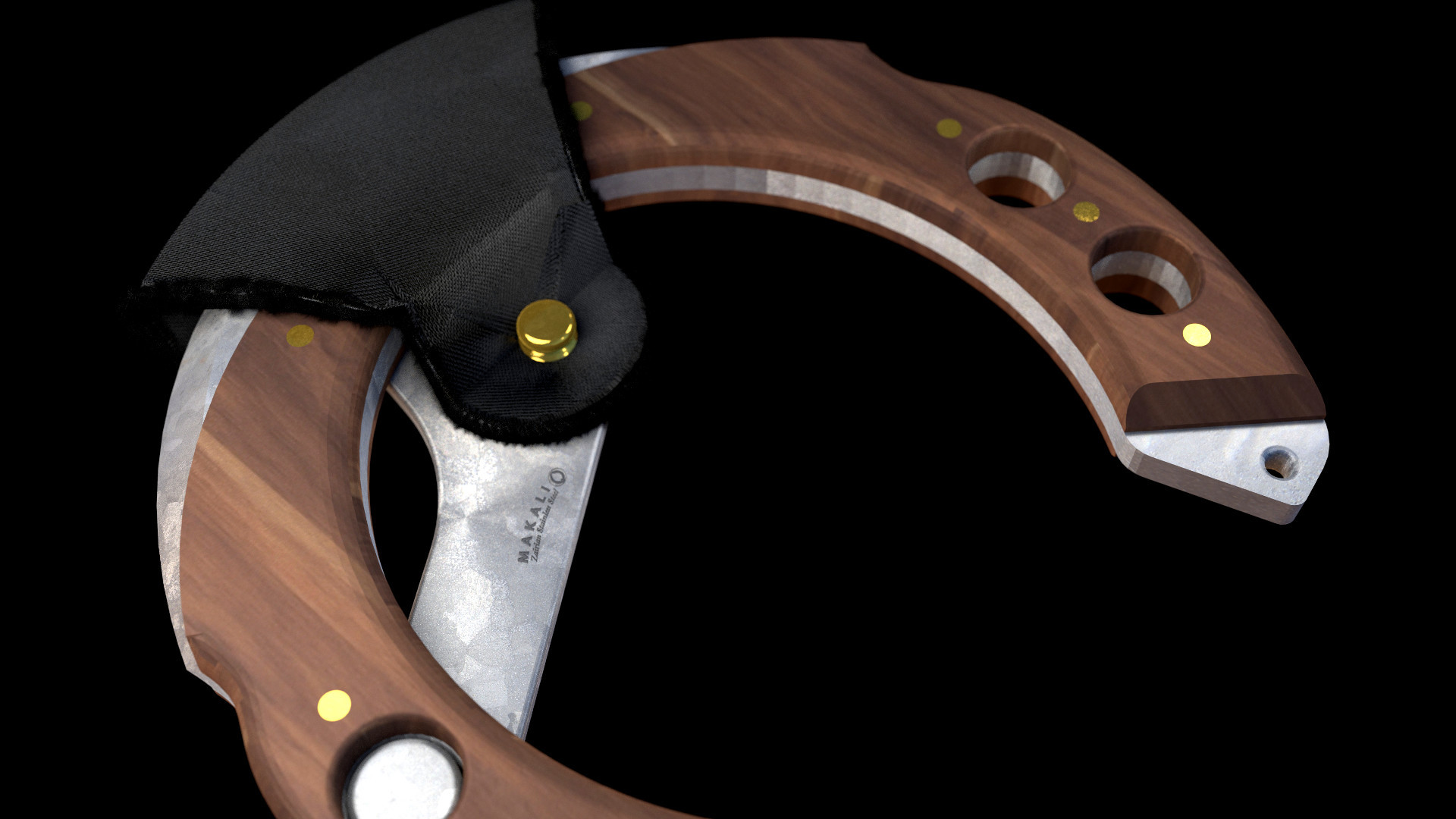 A multiple-uses knife to travel, inspired by the historic projectiles of the Zaire tribes, and created like an emotional design product.

For the African man living in savannah or in the forest, the weapons meet a vital need. Bellows, anvils and scissors produced, since the first millennium, some wonders. Straight left from the forging mills of Zaire, African art presents hand made, solids and richly decorated weapons thus, exceeding their initial role while becoming, as well as the jewellery, prestige signs. Striking by their terrible and attractive beauty, their history is readable in their lines. Some have curved blades, adapted to the body of the carrier and astonishing symmetry, while others are carved bearing the effigy of a hieratic divinity. All draw their wealth in their multiple analysis dimensions: objects of experience by their uses, of emotion by the link which bind them to the user, or of history by their mythical dimension, all testify the knowledge that the African craftsmen had in metallurgy and of their cultural wealth.

How to, starting from the analysis of crafted weapons of Zaire in their three dimensions (experience/emotion/history), transmit this beauty to a semi-industrial product ?

Objects of art and history in Africa

The history presents here splendid works, relatively recent to us since they go up at the end of 19th or at the beginning of the 20th century, period of apogee of wood and metallurgy techniques in Africa1. Objects of user-friendliness astonish, as the spoons which integrate decorative elements without rupture with the functional role (C). A zoo-morph effigy can appear, giving a mystical value to the object: it is the creation of the myth of the object. Before the imported firearms from Europe, the possession of combat weapons was, in many tribes, the privilege of the chief. Thus, each weapon had a strong aesthetic, a carved form or a kind of sinuosity of the lines, just as each weapon was sacrilized by prayers and sacrifices. On each blade some marks indicate the last history and uses of the weapon. 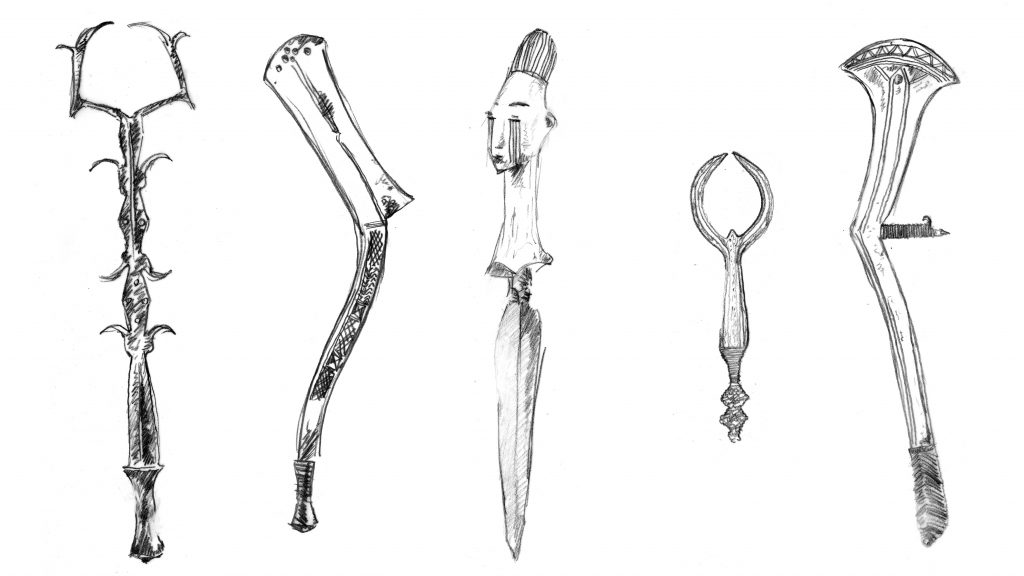 « The terrible beauty of the instruments of death »
(Marc Félix, ethnologue)

Certain weapons show a high level of control of the metallurgy, have blades decorated with fine veins, handles of wood raised of brass nails, a real “sword-jewelry” will say Laure Meyer (historian of art and journalist), “of a remarkable line” (1). Zaire has a certain creative wealth for this reason: on sabres of long blades with fluid lines are assembled short and squat handles (3) (4); the grey iron blade of a Mangbetu dagger contrasts with its warm coloured handle enclosed with brass, sacralized by the stylized image of an ancestral spirit (2). At Ngombo and Doko, knife-sickles shows an astonishing symmetry (5).

Laure Meyer informs us about a remarkable culture: “Findable only in Africa, this weapon does not meet nowhere else. The alternatives are numerous; the blacksmiths always managed to organize the curves in a whole of an exceptional harmony which however remained perfectly functional.”. The knife of Matakam (6) is remarkable for its so particular use: its owner carries it directly on the shoulder, in decoration of prestige. Some would also see a sign of membership there, the blade coming to agree with the shapes of the body, thus confirming the link of the object to the user.

In short, crafts and metallurgy in Zaire:

* Zaire presents spoons or sword-jewelry of prestige, with fluid lines, often symmetrical.
* Much of objects are sacralized by sculptures and mystical incrustations, the effigy of an animal or a spirit mythify the object.
* Each object is the single property of its owner and testifies to his personal history, of he’s last experiences; thus certain weapons were directly carried on the shoulder as a sign of prestige and of membership (the object agrees with the body).

The object of experience source of emotional link

“The seventeen months of Latitude Zero changed little by little, in my memory, in a kind of single moment, of a stunning intensity, during which I lived almost simultaneously all that it is possible to live. […] I went along rivers and climbed mountains. I tested the joy, disappointment, the unhappiness, the fear of dying, the euphoria and despair.” (Mike Horn, Latitude Zero). Certain telling of travel, like the Mike Horn’s one (who went the world while following the line of the equator), let us understand how a product of industrial nature can become an object of emotion, a companion object. Some particular quotations inform us:

These testimonies show the importance of the experience, with which is linked the body (“I feel it to crack”), an intense and repeated experience, in the creation of the emotional link of the man to the object. A parallel in psychology shows that these emotions are stored then reactivated in some “simulation loops” by some “somatic markers”, created by the somatosensory area of the brain, integrating memory of body’s last and present states. If the emotional design exists, it would be thus entirely related to the last, present or virtual experiences of the body. One notes here the importance of the body in the product using, the handling of the object.

In summary, my definition of the emotional design: