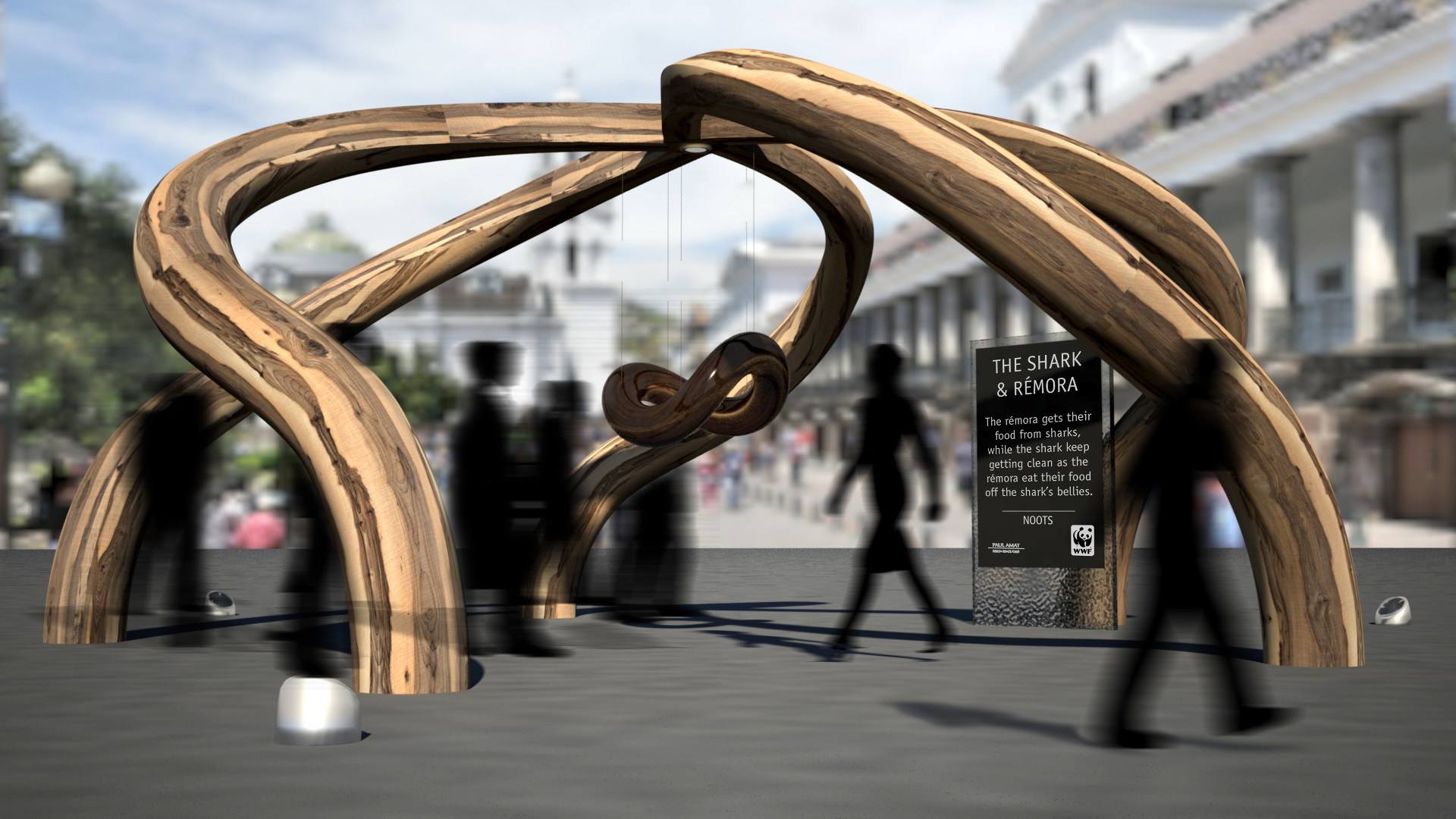 An art installation consisting of five nests representatives of nature findable symbioses, to denounce deforestation in the Amazon and bring to a form of reconciliation with nature.

In ten years the Amazon forest has shrunk by 500,000 square kilometres (approximately the total area of France). In terms of area, the Brazilian Amazon is the one that suffers the greatest annual deforestation of the planet. Since the installation in 1960 of the first oil well, the « Kichwas » of Sarayaku (indigenous and autonomous village) continue to struggle peacefully against the soldiers and mercenaries who, in behalf of major oil companies, try by all means to claim the ownership of the land and its resources. Beyond their struggles, Kichwas are recognized for their way of life close to nature, especially the symbiotic relationship they have with the chestnut of Brazil: the Kichwa allow the tree to grow better and faster, the tree enable them to feed and use its wood.

How to bring the international community to be affected by the problem of deforestation in the Amazon, by the struggles of the Kichwa Sarayaku, and to reconsider the relationship of humans with nature? Designed as an artistic installation, NOOTS is a set of « roots-nests » housing a symbolic wooden sculpture, representative of an example of symbiosis in nature.

An anthropology of images

“Gilbert Durand joins again with his orientations while showing how much the images are grafted on an anthropological way, which starts with the neuron-biological plan to extend to the cultural plan.”.

The anthropology of images provides the possibility of releasing the designs and prototypes who give their direction to the images. With Gilbert Durand, the images are put in link with the activation of fundamental neuron-biological reflexes named “postural”, “digestive” and “sexual” reflex, this last being in the final analysis only one dialectical of the two first. He distinguishes three fundamental “dominant reflexes”: the postural dominant one, basically represented by a separation (G. Durand will use the term of “Spaltung”: the symbolic act to separate), the dominant digestive one, which represents a symbolic reconciliation and the sexual dominant one, represented by all the symbolic cycles of the nature.

In connection with problems such as: “how to sensitize the international community”, where “sensitize” inclines to a feeling of conciliation, the dominant digestive one enables us to reach a privileged state of the reconciliation symbolic in the base of the anthropology of the images. This one (the dominant digestive one) gathers several structures of language such as: materials of the depth (water or cavernous ground); the utensils containers (cuts and trunks); the viscosity of the representative elements; the sensoriality of the representations; the meticulousness and the setting in miniature.

In summary, the anthropology of the images

Can be made of roots, the nest is a symbol of the mother-child protection.

Sustainable and profitable association with several organizations, or parent-child dependency that breaks into adulthood.

The original ancestor, the common strain… It is also set in a place, it create strong ties.

The Amazon is such mother nature, universal mother.

Deforestation is the parasitic activity, the extreme opposite of symbiosis.

The installation may take the form of protective nests (recalling the protective love of mother and mother-child symbiosis), emerging roots look-alike, surrounding a symbolic sculpture of these symbioses, as if Nature (Mother Nature) had itself even protect these little miracles.

The chestnut of Brazil and Kichwas

The Kichwa people of Sarayaku allow chestnuts to grow better and faster, chestnut allow them to feed and use its wood.

The shark and remora

One protects the other and allows it to travel, the other one of its cleans parasites.

One protects the other and the other enables the one to eat.

One protects the other and allows them to feed, the other cleans up one of its parasites and food scraps.

One allows humans to digest, and the others are feeds.